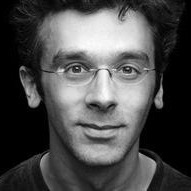 Kevin Slavin is a serial entrepreneur, senior executive, and designer whose work has pioneered novel intersections between digital systems and the physical world—from location-based games to pathogen-sensing bees.

In 2021, Kevin began actively advising Poppy, and is leading Marketing and Creative for the US/Canadian startup pioneering indoor environmental pathogen sensing. Poppy's work in using next generation technology to sense pathogens in the air is setting new standards for the knowledge and action to mitigate risk in major multinational corporate offices, cultural institutions, coworking spaces and even airports.

Since the onset of the coronavirus pandemic, Kevin's work in microbial sensing has led to leadership and advisory roles with companies building critical new tools to understand the intersections between architecture, people, and microbial environments. He is reshaping not just our ability to mitigate the risks of infection and contagion in common spaces, but overall understanding of the built environment. These are the emerging technologies that make the invisible world visible.

Through his work with medical clinics during COVID, Kevin recognized the crucial role of indoor environmental monitoring in mitigating exposure risks. As advisor and consultant to the founding team at Phylagen, he participated in restructuring its market plans and approach, identifying customer demands and frameworks to lead the redevelopment of some of its digital products, and initiating the company's largest single commercial deal.

Earlier in the year, Kevin formed the Pandemic Task Force for Crossover Health as it shifted into new modes of care delivery in hundreds of clinics across the country. He also ran their marketing and communications during the height of the pandemic.

Kevin previously was the founding Chief Science and Technology Officer for The Shed, the groundbreaking $500M cultural institution built for New York City where he designed novel interaction systems for the institution ranging from location sensing to the infrastructure for live broadcast performances. He also oversaw and moderated cultural programming around technology and science.

As faculty at the MIT Media Lab, Kevin founded the Playful Systems Lab where he developed novel methods for environmental metagenomic monitoring while using honeybees in modified beehives. Funded by the Mori Building Company in Tokyo, his research has been used to inform thoughts and processes in the design of skyscrapers. This led to work with the Japanese Olympic Council, for which he (unsuccessfully) set out to genetically engineer the mascot for the 2020 Tokyo Olympics.

Kevin is also Co-Founder of Area/Code Entertainment where he designed and developed some of the earliest location-based games and entertainment. Under his direction, the bootstrapped company worked on large projects with Microsoft, Nike and Viacom, as well as institutions such as the Knight foundation and the UK Department for Transport. The company was eventually acquired to become the New York office of Zynga.

Kevin's work has been shown at the Museum of Modern Art, the Design Museum of London, the Storefront for Art and Architecture. His bees were used to sequence the microbial fingerprints of Venice in the context of the 2016 Venice Architecture Biennale. His work around environmental sensing and genetic engineering has been the subject of feature articles in everything from WIRED to The Atlantic. His earlier location-based work has been featured in The New York Times, the BBC, and Wall Street Journal.

Kevin is also a founding editor of the Journal of Design and Science (MIT Press) and his popular TED talk “How Algorithms Shape Our World” has been viewed by millions. He is noted for his ability to engage broad audiences with his thoughtful, yet easy-to-understand presentations. He effortlessly combines deft storytelling with clever commentary, synthesizing complex ideas into engaging communication that resonates at scale and in intimate moments.

A graduate of Cooper Union, he now serves as a trustee and former Vice-Chairman of the board. Prior to founding his first company, he was an award-winning Creative Director and strategist for some of the largest global advertising agencies.

Subculture: Microbial Metrics and the Multi-Species City is the new exhibition that will be held at New York City’s Storefront for Art and Architecture starting Tuesday, September…